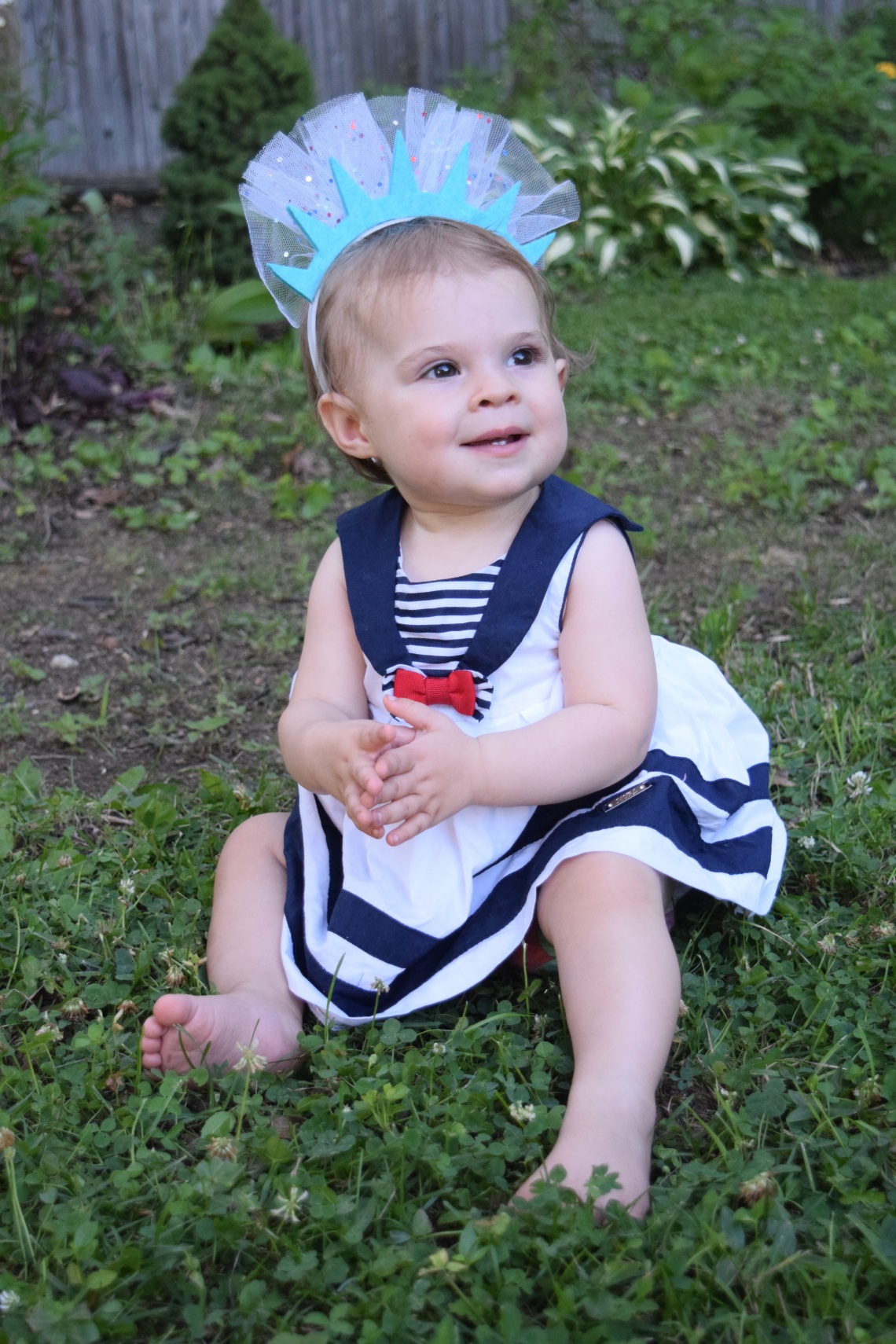 The oppressive heat of late July rendered the kids and I housebound, with all the air conditioners blasting. It’s been challenging since I go stir-crazy if I can’t get fresh air before 9 AM every morning. Also, Caroline may be in the middle of transitioning from two naps to one. She’s 13 months right now and for a little over a week, has taken to arching her head back, throwing herself against the sides of her crib when we try to put her to bed at night (or back to sleep when she wakes to nurse). The piercing cries that follow after a head slam into the sides of her wooden crib (it’s like she aims for just above the bumpers) attack every mama nerve in my body. The worst part is not being able to anticipate when she will angrily react like this (and harm herself) so I’ve felt on edge day and night for a week.

Brian finally called her pediatrician just to check-in today and he confirmed that she’s likely frustrated and probably ready to move to one nap. [Groan] It’s not the best news, but it does open up mornings to us again. Our daily schedule up until now had been very consistent:

Bedtime Schedule for our 3-year-old and 1-year-old

Cognitively, I know there is a lot going on with her too. In the last week, she’s been communicating in big ways — she points excitedly at whatever she wants us to look at or play with with her, she understands simple directions like No, Stop, and bring me the book and will follow various commands. Can I have a kiss, can I have a hug, can you blow kisses, put the hat on your head, and can you touch your toes are just a few of my favorite questions to ask her. She’s known “clap,” and “wave” for a while, but those are still some of my favorites.

We could work on signing more with her. She knows “milk” and “all done” but I vaguely recall that Emilia had a few more signs in her repertoire by now; I could be wrong. I don’t stress too much over recording things for comparison, child to child, because I don’t want to foster competition between my kids (in my mind or in theirs).

They’re truly wonderful sisters to one another though. I’m operating on intuition as far as how I encourage the development of their bond, but a lot of the time, I feel a little sneaky for wielding it to my advantage. For example, if I want Emilia to take a nap and she’s resisting, I’ll stage talk to Caroline about how important rest is to her body and brain can grow. Then to Emilia, I’ll say something like, “you’re SUCH a good role model! Caroline is such a great sleeper because you must have taught her what she needs to know! Thank you!” It’s a lot of play acting on my part, communication, and engagement with both kids. Emilia has been such a great helper with baby proofing too; she’s often the one hunting down the covers to markers and other small choking hazards and bringing it to my attention with a furrowed brow and a censuring, “MAMA. LOOK. [holds up a tiny dollhouse teacup.] This is NOT SAFE for Caroline. Please take care of this so she does NOT choke.” I mean… love her. Love her. Love her.

Part of Caroline’s bedtime routine includes turning on her sound machine herself and then flipping off the light switch. We also have pushed a “lovey” on her to reinforce the routine even further. We refer to this bunny blanket thing as “so soft” and it always makes me laugh at the way she dive bombs her head the second I pick it up and say, “So SOFT!” as she nuzzles into the softness. I have to move my face out of the way fast or she’ll crack my nose with her skull. Happened to me more than once so I’ve learned!

Physically, she climbs up stairs, can seat herself at the art table and can safely dismount from our bed, Emilia’s bed and the couch. With a lot of reinforcement over the last week since she started doing this, she lays on her belly then wiggles feet first down the side until her feet touch the floor. She’s also become quite adept at using both a fork and spoon. We’re certainly not pushing these things on her so much as answering her curiosity with teaching. She sees her sister doing things and wants in on the fun; at dinner, she takes my fork and tries to stab her own food. Actually, she was doing this as early as the 4th of July. I thought Brian’s Nana was going to have heart failure because I didn’t want to keep fighting Caroline — she insisted on using a full size fork herself. Since about May, she’s been mimicking when I push my sunglasses up onto my head, but that’s an old favorite she’s still into now.

Her favorite book is Peekaboo Kisses. She loves to unfold the flaps herself and pat the various textures. One time, in the spirit of learning, I took her foot and rubbed it on the different furs and feather pages and from then on, at each page turn I’d feel her leg flicker in anticipation as we turned the pages and lifted each flap. Then she’d delicately lift her little foot up onto the fur and laugh hysterically as she rubbed the texture with her bare foot.

If I had to name my absolute favorite thing about Caroline right now, it’s how affectionate she is. She throws her entire back into her snuggles when we’re all in bed together, launching herself like a snuggling puppy into Brian or me or Emilia. She’ll also back her butt up and plop herself down in my lap if I’m sitting cross legged on the floor. Usually with a book. Finally, if I’ve been our to the grocery store or the gym or somewhere, or Brian is returning home from work at night, she absolutely BEELINES for us at the door, waving her arms and excitedly saying: “ga, ga, ga.” She was saying both ma ma ma and da da da just before her birthday, but seems to have reverted to this new sound for just about everything exciting. She especially loves to squawk it when we see our neighbor’s dog.

As far as adventures in her 13th month, we celebrated the 4th of July with family in CT and ventured up to Maine for a day trip to see all our favorite spots, one of which was the arcade I played at when I was a kid. They LOVED it. It’s probably the greatest pleasure of being a parent, watching your children experience the fun stuff for the first time. It’s probably my favorite, at least. Caroline is an excellent traveller too, so I’m excited to see what the next few months hold for us as far as adventures.

It’s not truly summer until I’ve had a rum punch at the Oarweed, sitting outside on the deck with a view of the marginal way. Maybe next summer. 😭
The BEST helper I could wish for. 💕
Maybe before they’re off to college we’ll master the art of the family picture but for now, I’ll happily take this as a record of this insane, amazing, crazy period of our lives. 🥰
That morning light just hits different when you wake up by the ocean. 🌊 We saw the most beautiful sunrises the couple days we were away in June but I love this view too. My boys!! I love that we can both say this now.