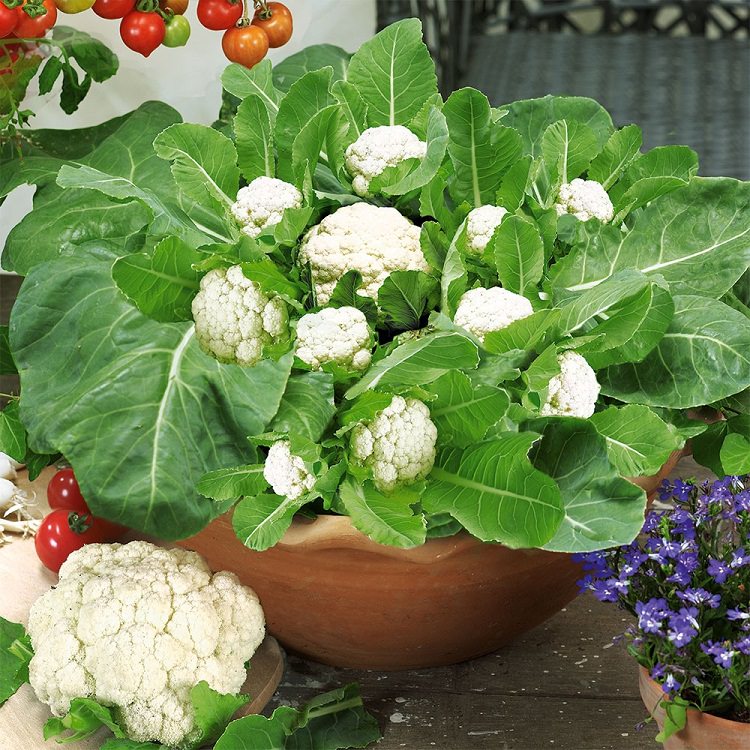 I’ve mentioned many, many times on this blog that I’ve longed for a proper yard for AGES so I could finally have a veggie garden. After we purchased our first home (we closed a year ago today actually), my greatest priority was my getting perennials in, which I’d been buying and tucking away as best I could in our former landlord’s well-established garden, or else, begging my mom to hold for me in her garden, but I was less ready to dive into the vegetable realm, since I knew the soil likely needed a lot of amendments and we weren’t going to moving in until July which is long past when you should ideally start planting in New England in Zone 6/7. 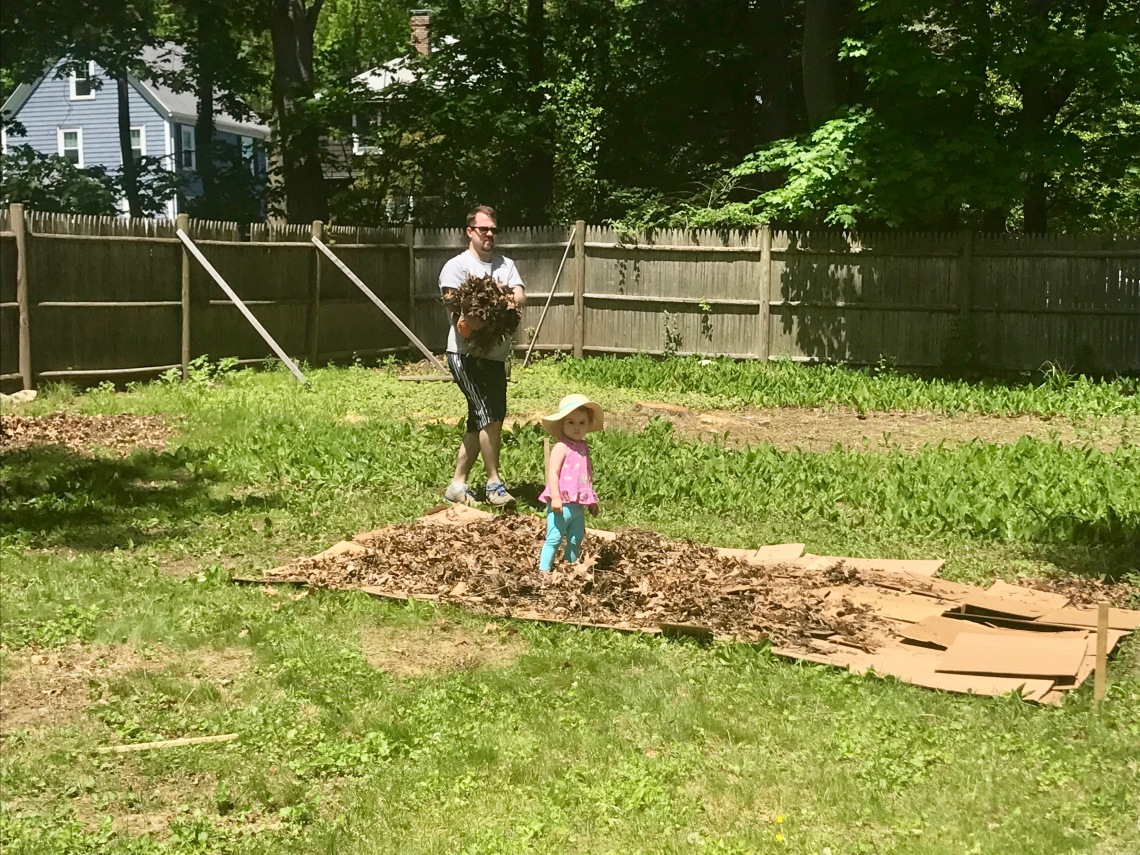 our “back to Eden” bed that we scrapped

Flash forward to now: I’m hugely pregnant and so tired of waiting to put in the damn vegetable garden. After a thwarted attempt to try “Back to Eden Gardening” — (my mom is an experienced organic gardener and convinced me that adding nitrogen-sucking wood chips to a vegetable garden was insane) — we were prepared to just amend our sad leftover “lasagna bed” of cardboard, leaves and grass clippings, and soil/manure/compost with additional bags of Black Kow compost and throw what we could in there and hope for the best.

Then, last weekend, I had a stroke of inspiration. Since we recently decided against trying to reseed our lawn since we still need to have the whole thing leveled, and I’d been going bananas staring at a large patch of grassless dirt just off our patio where we had two massive in-ground stumps finally ground up earlier this spring, and I don’t want to wait around for help from my family to expand the patio anymore,  I realized it made the most sense to just dig down a bit to level off the area and throw our garden THERE. Boom — dirt pit where the stumps used to be: SOLVED. And bonus, the veggies would be easier to access from the kitchen. 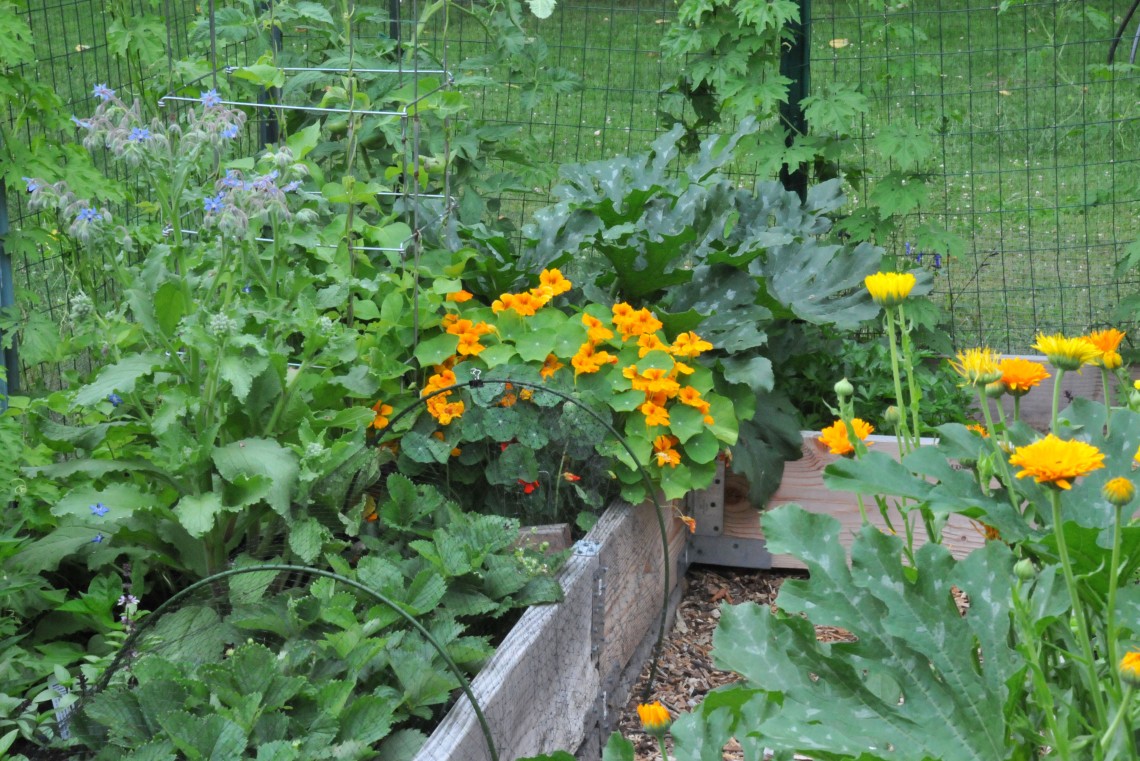 So my tireless and devoted husband spent the majority of last Saturday afternoon digging out and leveling a large, organic-shaped bed. As it was leveled, I became more and more excited imagining cobblestone pavers along the edging and creeping herbs like lemon thyme spilling over their edges, accompanied by nasturtiums for a very, “English countryside” potager-garden affect. 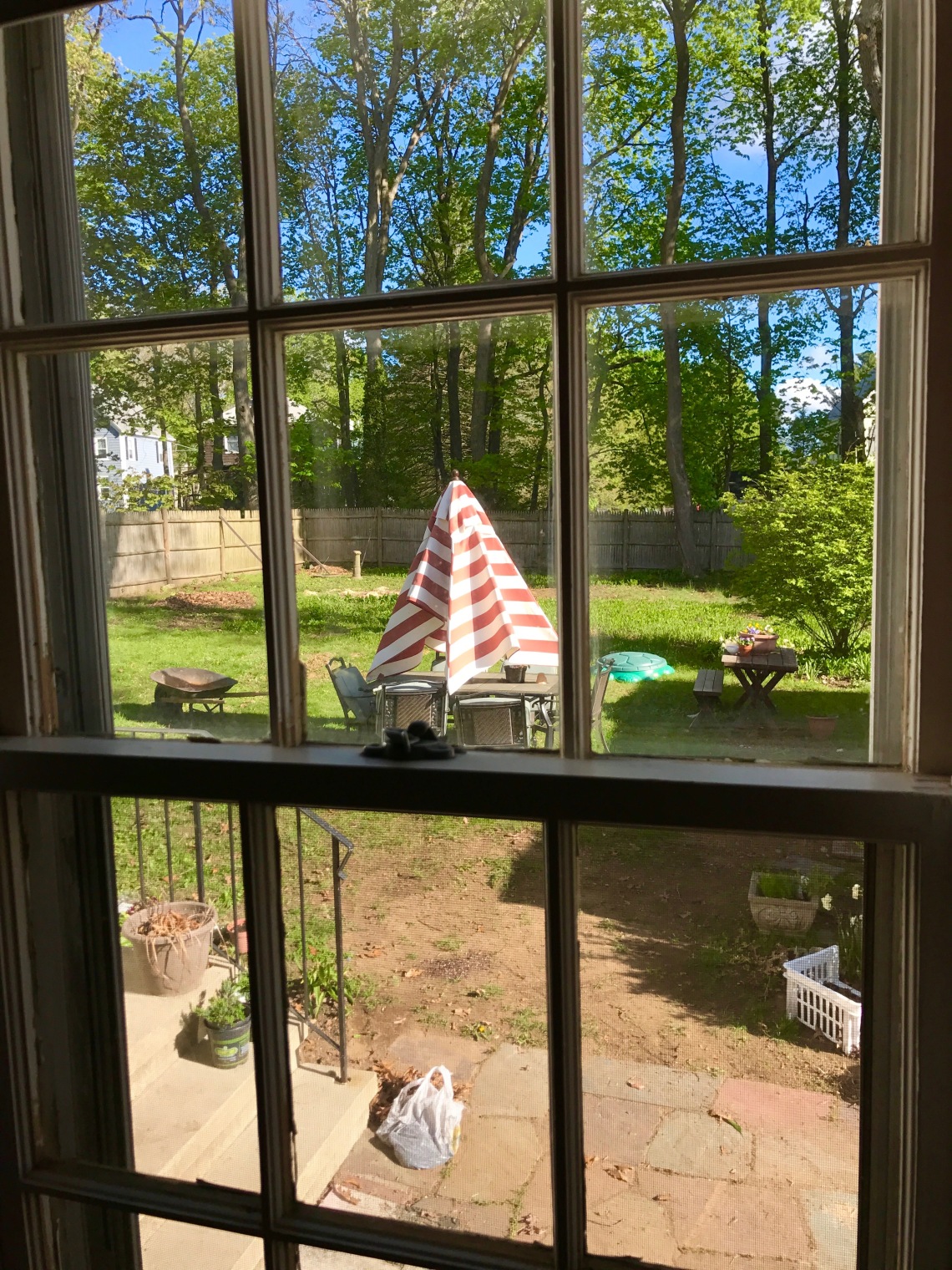 post-stump grinding, this grass-less pit was the bane of my existence for ages

One of the issues though, which I’d not realized in my veggie gardening naiveté, was that I’d asked the guys who’d done the stump grinding not to remove all the wood chips that resulted from said grinding. This was before I was educated that mulch is not quite the same thing as wood chips. I assumed that wood chips would be a valuable soil amendment in the development of that dark, magical, black gold I know as compost. Which it is — however, they’d have needed to be layered into a compost heap along with many, many other valuable things like veggie castoffs and grass clippings and left to stew with some worms for at least a season, just to give you my quick and dirty overview of how to compost. But more on that in another post. 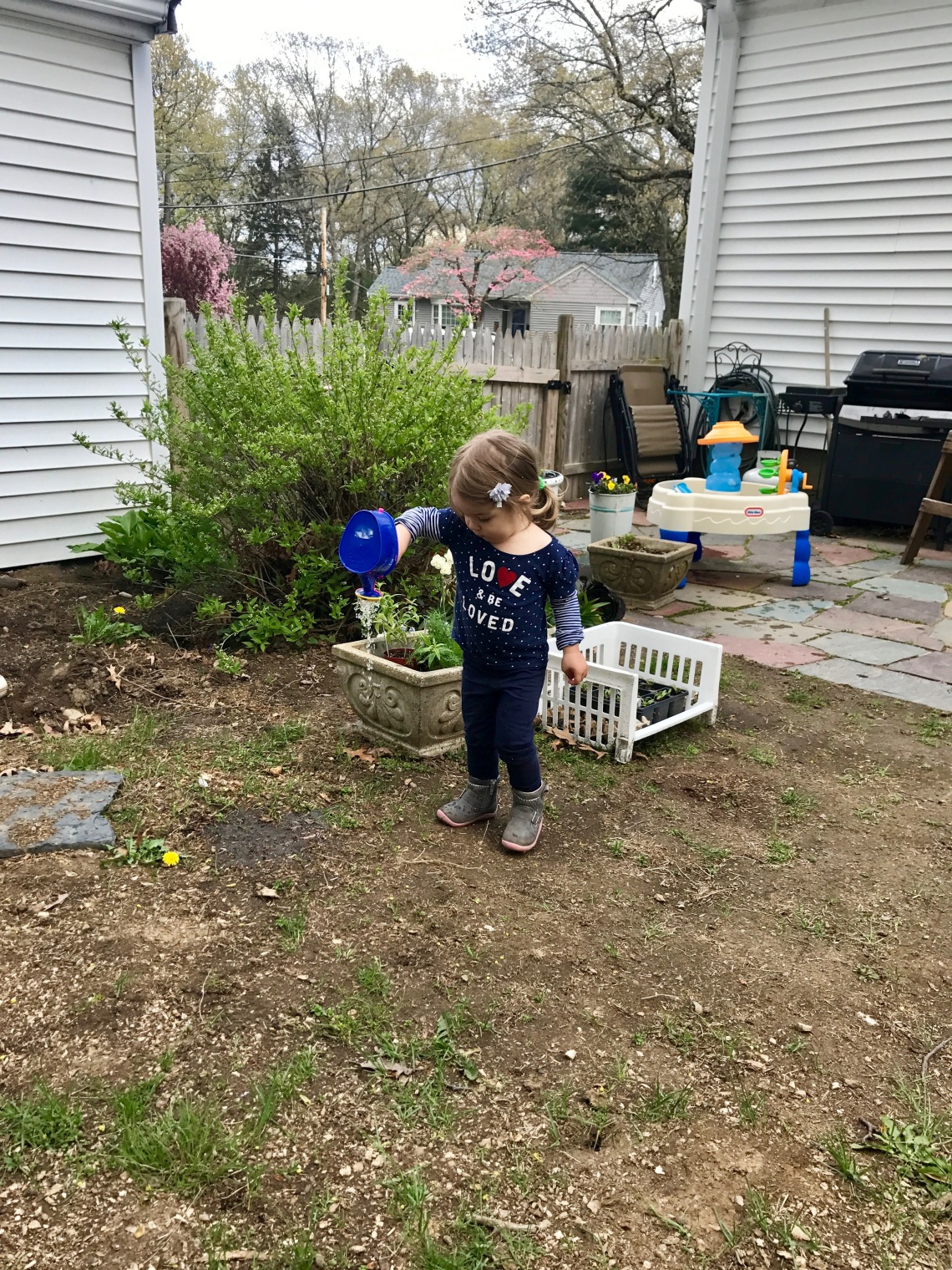 What I soon learned was that the workable “dirt” where I’d hoped to put our garden was actually a chunky, wood chip-laden pit devoid of all the delicious, compost-y wonderfulness that I’ve taken for granted all my life because I’ve always lived among really great gardeners who composted and thus had easy access to fabulous, nutrient-rich dirt.

I felt like a complete moron, to be honest, to have taken this for granted. And the most frustrating thing is that I actually do know a lot about composting! As I was reading more about prepping soil for planting and best gardening tips earlier tonight, I came across this 5 Secrets to a No Work garden article on the Earth Easy website and realized that so much of what was being espoused aligned with the damn “back to Eden” gardening method I’d been planning to use from the start. However, and this is a huge caveat, I had grossly underestimated the level of nutrient dense amendments we’d have needed to make to the “compost” layer of our “Eden”-style garden. The recommended way to approach it is to actually “lasagna” all the fabulous stuff I’d have normally just added to cold compost heap in the fall, then let it overwinter and ideally, you’d have a beautiful starting point for your spring garden. But, I digress.

And unfortunately for our poor little veggie garden, I’d asked my husband to build up the now-leveled bed with the cardboard, leaves and compost/soil mixture we’d previously layered for the “Back to Eden” garden bed. The result was a disastrous, now uneven, and compacted mess of leaves that aren’t all that close to decomposing, dirt, and manure/compost. I wish I could say I learned this as I prepared the bed for planting, but I actually planted the whole thing this afternoon in complete knowing denial that what I was doing was a mistake. With each trowel of leaf-y dirt, I said a little prayer and just kept telling myself that I’m due to have a baby in 9 days and I can’t keep putting this off. 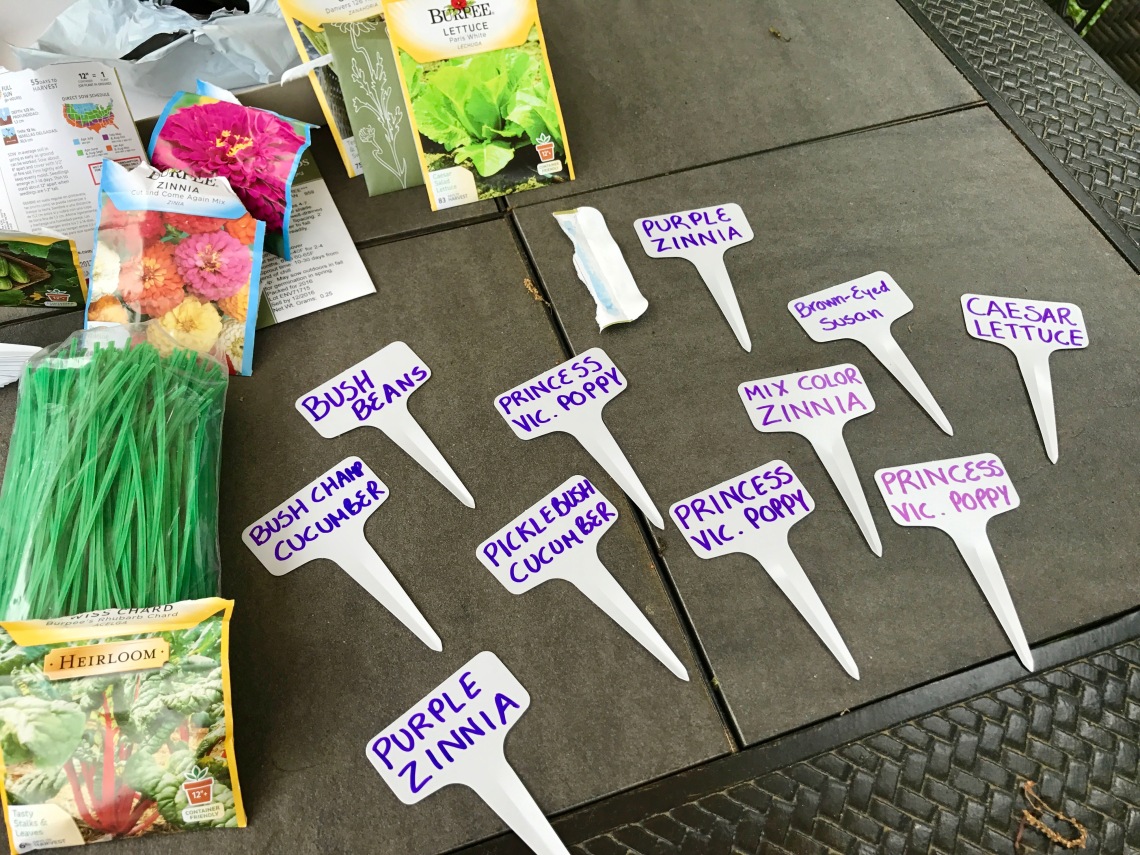 some of the seeds I started in February

But that is just the first half of the hilarity. The second is what I picked up to plant earlier today. Let me first say that in my excitement to get ahead of our veggie garden this year, when mild temperatures started to crop up in February, I took advantage and started a LOT of seeds: cucumbers, swiss chard, beets, beans… Then we had a series of snow storms in March and I lost my drive a bit. Cut to the April showers and biting cold days we had in May and here we are. Most of the seedlings I’d sown are washed away or dead of frostbite, or more likely, neglect, since I left them out in the garage instead of trying to keep them warm in the house for the early part of spring. All that survived of my seedlings is what I believe to be Swiss chard, some mesclun salad mix, and some purple zinnias. 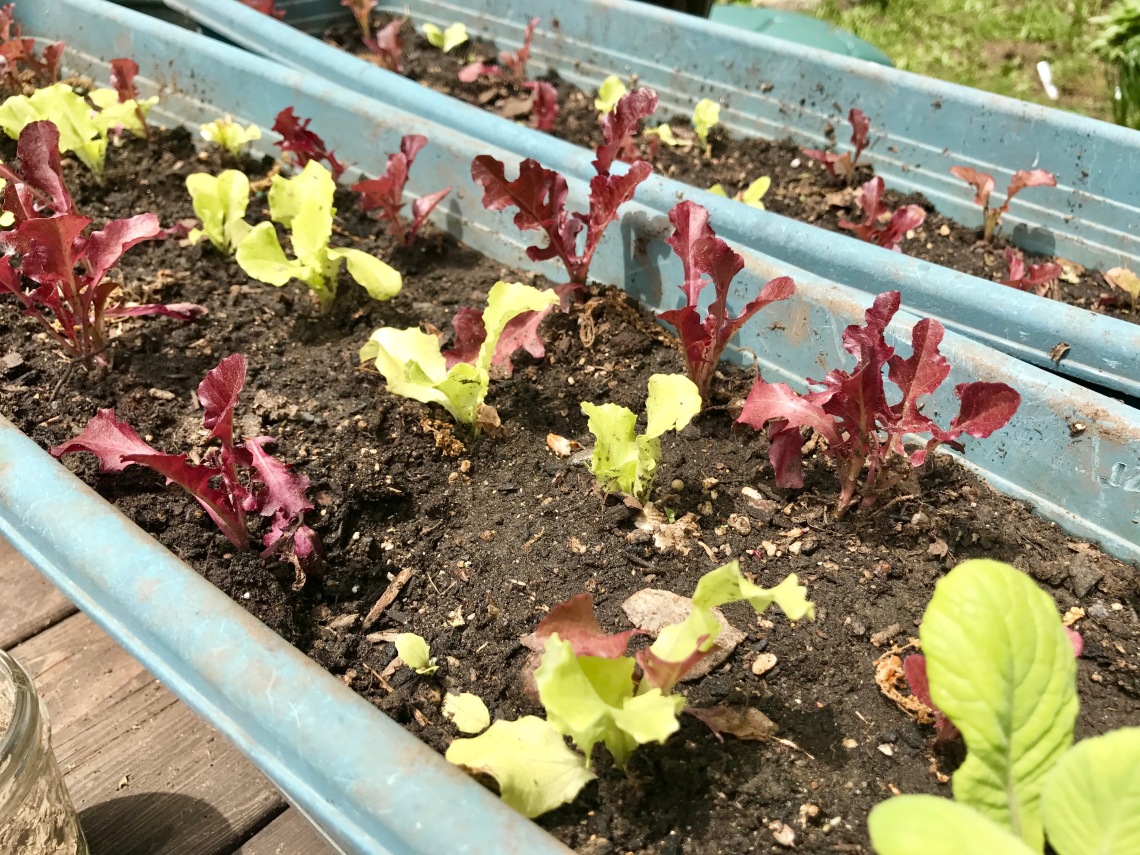 But doesn’t the lettuce look glorious? I can’t wait to not want to eat any of this in a few weeks when I have a newborn and all I want is Annie’s Mac and Cheese. And a nap.

I should also mention that about a month ago, we picked up some tomato plants at a local garden sale in our town. We were pretty excited about them since we were able to talk to the garden club members offering them and heard rave reviews straight from the growers about the selections we ultimately made: Brandywine, Sungold, Best Boy and Cherry Sunrise. I also grabbed one squash plant. Thanks to these purchases, I also learned what “hardening off” means (gradually exposing plants to the elements/sun, etc after they’ve been started indoors). It was a bit of a pain in the butt to manage this with the cold end of May temps, but I managed it. I also grabbed a bunch of gorgeous perennials on this trip too, but I’ll share those in another post soon. 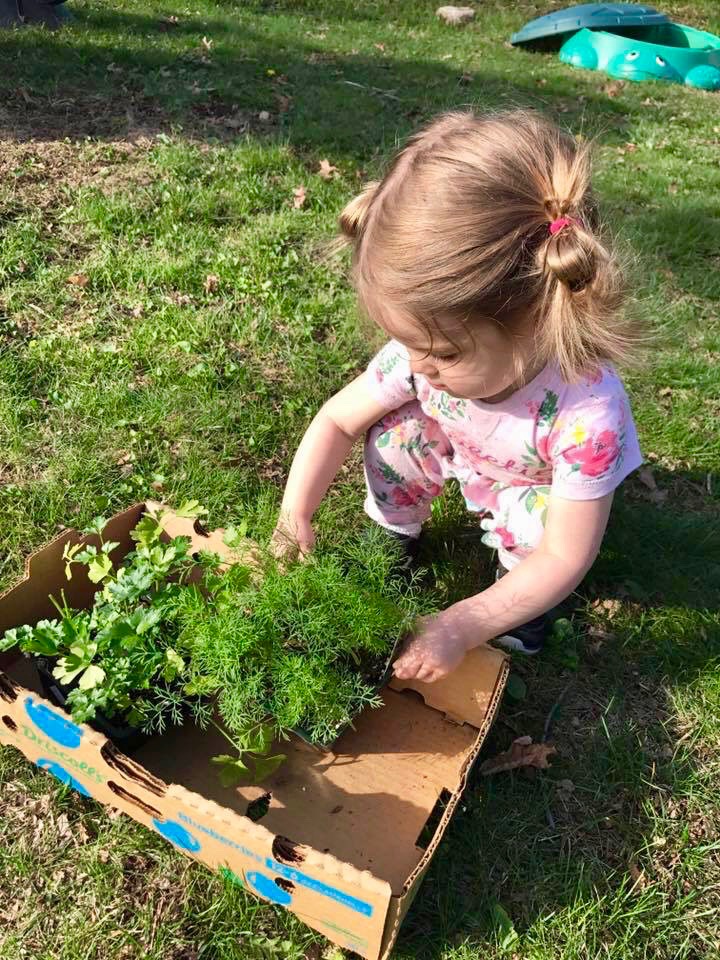 And finally, I picked up some favorite herbs with my mom about a month ago as well — rosemary, parsley, dill and tarragon. But had yet to plant them due to the where is the garden going to be installed dilemma.

Cut to today. I had a check-up about 45 minutes away and conveniently, right near one of my favorite, favorite markets: Russo’s in Watertown. Oh how I miss living minutes from this heavenly spot. Not only is the produce varied and crazy affordable, they have the most spectacular selection of seasonal plants. So I dipped in before my appointment and grabbed a bunch of stuff: broccoli, squash, cauliflower, peppers, a black raspberry bush with little raspberry buds already forming, basil, a pot of the large-head orange marigolds that I always drool over but never buy, and finally, a citronella plant which is said to deter mosquitos.

I’d been looking to pickup the garden staples we love, like cucumbers and zucchini, or some other varieties of lettuce like butter or red leaf or even arugula, but most of what I saw was what I’d always known to be cooler season crops and stuff my mom has always avoided growing because it’s fussy or difficult or just not worth bothering with. Still, I ignored my better instincts and persuaded myself that a garden full of bell peppers would be impressive and got sucked in by the little cauliflower buds starting to emerge on a 6-pack I managed to locate amidst others that weren’t fruiting yet.

I managed to get everything planted except the broccoli and squash and didn’t even bother with my cucumber and pole bean seeds since I’m going to try starting them in pots again before transplanting. Then I retired, exhausted, into the house to get Emilia ready for bed. Finally, hours later, I decided to do a little more research and learned a lot of really depressing news about my labor of love our in the garden, for example:

All this to say: the garden is in, but I’m fairly certain I’ve made massive, massive missteps along the way. I’m going to top-dress it all tomorrow with some compost and figure out a mulch option as soon as possible and just hope for the best. I’ve learned a lot so far and considering that I’ve been exposed and around gardening my entire life, I’m glad I learned early on in my own gardening adventure that this is a lifelong process and I have a long way to go! In the meantime, I’m going to spend a little more time educating myself about the various requirements of the “essentials” we’ve yet to start from seed and hope to have some better luck getting those planted and established.

Happy gardening to those who dig in!

One year. We lost my dad exactly one year ago today. It still doesn’t feel real. Thank you to everyone who called and messaged. It meant more than I can express. It’s so strange how grief has tinted the last two months in particular. My dad went into the hospital the week of Christmas, 2021.
December, you used to be my favorite. But the last few days, man. It’s uncanny how things find you at certain moments in your life. Eerie. My parents didn’t often play music at home or in the car, preferring to chat on long car rides, but I do remember certain soundtracks of my childhood. My dad playing Billy Joel’s “River of Dreams.” All the late 80s, early 90s Elton… and then when Charlotte Church burst on the scene, I remember listening to her perform “Pie Jesus” and feeling chills. I couldn’t even say how I found myself playing her album “Voice of An Angel” this morning but I was belting out the high notes and thinking about what the words meant as I let the weight of life lately wash over me. It was like being back at mass on Sunday morning. Do you have songs that just find you when you need them? This one really came out of nowhere. I don’t think I’ve listened to this in 20 years. But it is like a salve for where I am today.
Celebrating 12 years since that chilly day. 💍