Spring, where for art thou? I bought pansies last week intending to plant my window boxes but New England had other ideas. Today it snowed.

In my attempt to escape the misery of this endless winter season and trick myself into patience as I await the bright and early AM coverage of the royal wedding, a few weeks ago I decided to investigate who this Meghan Markle was and what her show “Suits” was all about.

Now I’m not usually one to gush about something as low brow as television. But before you stop reading — I promise, this is leading somewhere you want to go. I should note that I am NOT a network TV-watcher. I was never a huge consumer of television before I met my husband, but Brian slowly turned me into a television snob. It started slowly: The Office. Thirty Rock. Parks & Recreation. Do you see where this is going? The quality shows. Now I almost exclusively watch Netflix and Amazon original series’ because they are just so damn good.

But Suits blew me away. I didn’t expect too much so I happily dove ahead, right into Season 7, (skipping seasons 1-6 because I’m impatient like that) but quickly fell hard for the snappy, intelligent, hilarious bromance between Harvey and Mike. The writing is superb and I find myself laughing over various lines, or often, little facial expressions I’ll recall Donna or Harvey or Mike making in something I’ve just watched.  IT’S JUST SO GOOD, so trust me and watch. And Meghan Markle as Rachel Zane, well.

Full on girl crush over here. Move over Price Harry, because I get it. If Meghan is at all like her character on the show, Rachel Zane, it all makes sense. Also, her HAIR IS ALWAYS AMAZING. I don’t know if I tooootally buy that “a mutual friend set them up” all blind date like, because if I was him and I watched the show which I have a sneaking suspicion that he did, you bet I’d be pulling all the strings to find a mutual friend to help get it set up, too. But watching almost five whole seasons of her has been such a luxurious treat and I can’t wait to see what her choices are as far as the wedding goes because she clearly has incredible taste and is stunning.

Also, as someone who used to watch Gossip Girl purely to admire the fashion and to figure out how (HOW) Blake Lively’s mane was as glorious as it was, between Donna, Rachel, and Gina, (ok, and Harvey, with his peaked lapels and Windsor-knotted ties; see a great Suits style breakdown here), Suits fills a void in me that is starved for elevated, subtle, corporate-world style. Jolie Andreatta, the costume designer, is killing it. Here’s a great collection of some amazing looks from the show. I had been getting my fill from Mireille Enos on The Catch, but it hasn’t had as long a run and the witty banter between the two leads isn’t quite as quippy.

But back to Suits. The first few seasons are especially amazing, so I’ve been loving the opportunity to watch them back to back, en masse like this. I say opportunity like I have no children, job, or life. As I write this, I’m hiding in our office, kids asleep, laundry and housework all in need of attention, yet all I can think is: do I have time for one more ‘Suits’? It helps that episodes are only about 40 minutes long. I feel like it’s also worth mentioning that it took me almost all of Seasons 7 and 1 before I stopped confusing Gabriel Macht for Johnny Lee Miller, of Hackers fame. I KNEW I’d seen and loved him in something but couldn’t quite place him. Well, when it finally hit me, it was like I was hit in the face with a ton of bricks: He was Johnny from one of my fav ever Diane Keaton collabs.

Does anyone reading remember a little film called Because I Said So? It was the movie that first introduced me to the magic of a Diane Keaton film set. (How about that Hampton’s House, am I right?) Also, knitwear. This is totally an aside but, do you know that Diane Keaton had her knitwear for that film specially made by a luxury knitwear designer? I learned this during a deep dive one night while I was fantasizing about how I will one day, eventually, (in my spare time), master knitting my daughters’ luxurious, Norwegian-inspired, heirloom-quality knitwear. Obviously.

Anyways, in the film, which is terrible but I love anyway, Mandy Moore plays one of Keaton’s daughters. The love-afflicted one. She also happens to be a chef which is the real reason this film has a special place in my heart. I love movies about chefs — even if they’re terrible. I can’t help it. Anyways, this specific film introduced me to the magic of a “Lady Baltimore” cake — Keaton baked it for Mandy Moore in the film, and ever since, it has topped my “To Try Someday” list and I will go to my grave with it still at the top of that list probably, seeing as it’s been like 10 years since I first saw this damn movie, and have yet to make the cake. 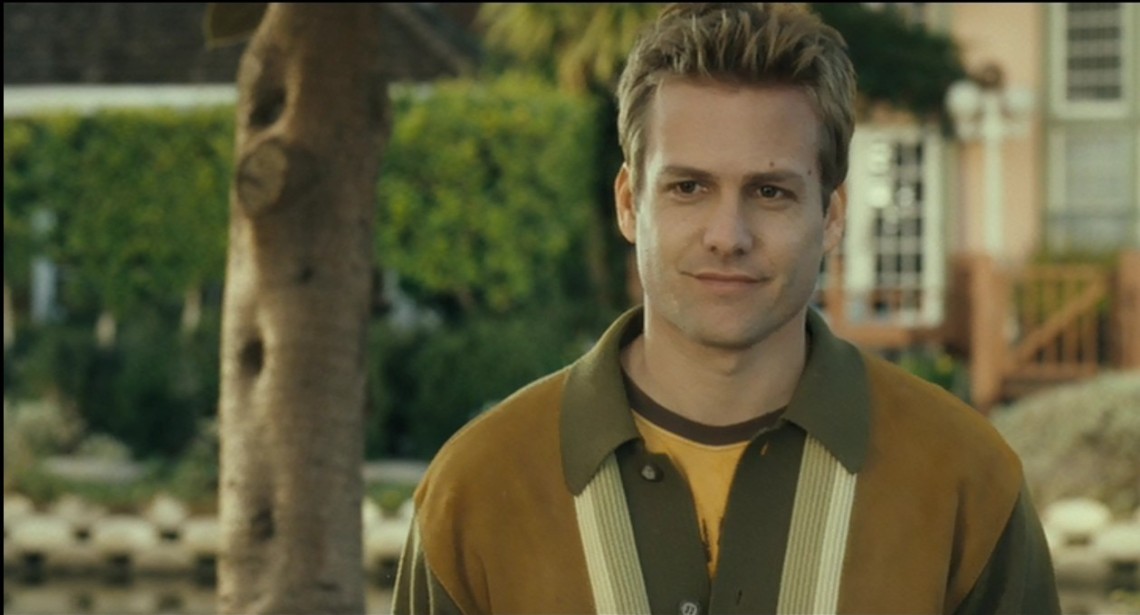 Johnny, played to adorable affect by Gabriel Macht, was the guy I’ve had in my fantasies forever more or less, since the first pages of Pride and Prejudice were seared into my heart, in that he appreciated “Milly” (Mandy Moore’s character), just as she is. Much like Mark Darcy appreciated Bridget Jones, just as she is. (Hang on, there is an amazing connection here that I’m rambling my way to. Just hang on!) That, and those brooding, dark brown eyes. Because good God, what is he wearing throughout that film. And why is his hair that color? Yikes.

Although the second Bridget Jones’s Diary was absolutely horrid, this is in direct inverse contrast to the bright beacon of light HIS REAL LIFE WIFE, Jacinda Barrett was in the film, as the misconstrued love interest of none other than… Bridget. The fact that these two real life celebs had two roles I absolutely adored them in in two films I really appreciated just makes me all that much more certain that there is someone pulling the celestial strings somewhere and that deja vu really is something important… but, I digress. If you’re still even with me and were able to follow any of that…

Then the last thing I need to mention as far as weird celestial coincidences is this: Amanda Schull from Center Stage is ALSO on Suits, as is Gina Torres, from the previously mentioned The Catch. And both are absolute bad ass bitches (excuse my French) in their roles. I particularly adore Amanda as Katarina, Louis’ devoted Associate. She plays her absolutely perfectly and I love to see the dancer I wanted to BE way back when, resurface in a totally different role. And as for Gina, well — I can’t wait for her spinoff. 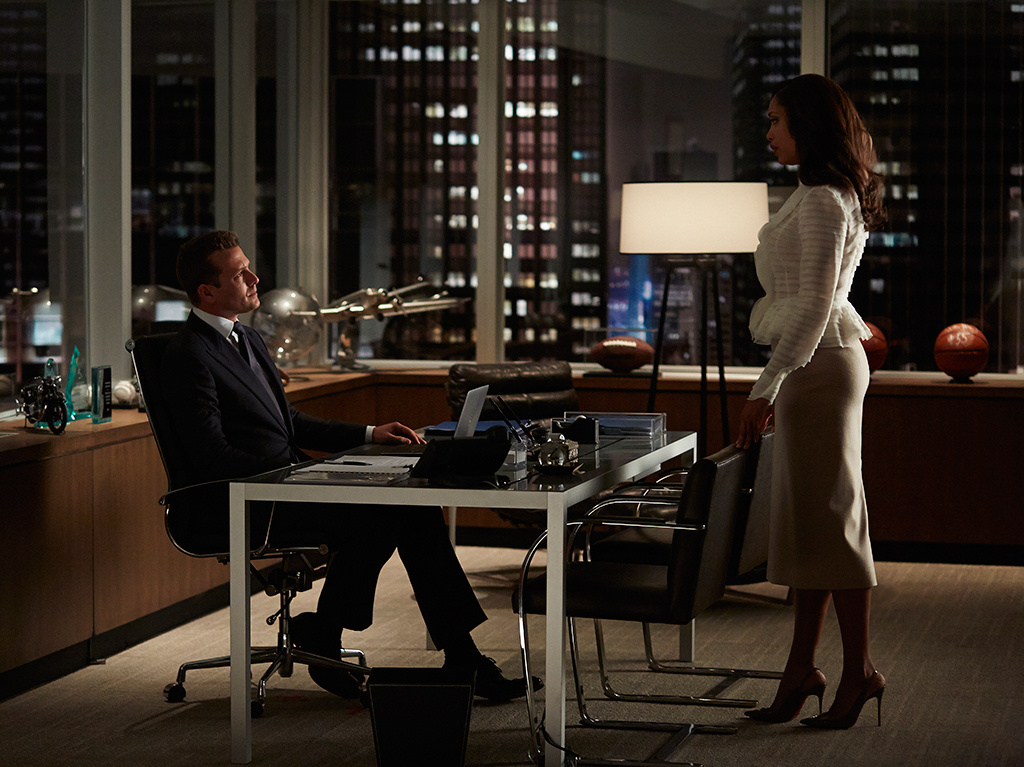 But back to the show. It is really amazing and you need to watch. Trust me! Seasons 1-6 are free on Amazon Prime right now.

If you need more convincing, the stories about what they’re like on set make me chuckle. As do the bloopers. Enjoy and happy weekend!